The Legend that is MacGyver

Saturday morning, you just woke up and you're waiting for your folks to get out of bed so you can have breakfast together. What better way to spend that idle time than watching one of the best TV series of the 80's and early 90's.

As a boy these Saturday mornings were some of the best mornings for me. Just me and my brother, awake way too early to be good for your health, sprawled on the sofa watching Mac do the impossible.

The fact that I lived in Switzerland at the time MacGyver came into my life made it even that much more fitting. I say this because, let's be honest, Mac gave the world the Swiss army knife. That's a given. 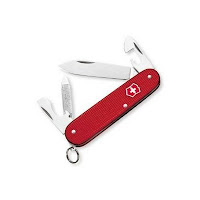 If it wasn't for him Ray Mears would be cutting his newly caught dinner of raw Salamander eggs with a blunt kitchen knife.
But it wasn't so much his choice of handicraft as his spectacular use of them. Mac was the ultimate problem solver.
Using day-to-day household items to fabricate tools and ways of escaping a precarious situation, in many ways similar to his 1980's colleagues the A-team, Mac has established a place in popular culture. His science feats have born a phrase referred to as Macgyverisms.
Angus MacGyver born in Mission City, Minnesota, March 23rd 1952 received his first chemistry set at the age of 10. An avid Hockey player and mountain climber he has always believed in Environmental preservation and racial equality.
Yet MacGyver remained an "everyman" hero enabling us all to relate to his genius but fragile character.
Always prepared for adventure, his mind is the ultimate weapon...
Labels: Adventure Film TV