What is the best opening theme of all time?
There are a few contenders in my eyes. I would like to restrict it to 10.
So let's break it down...
10. The Dukes of Hazzard
If not only for Daisy Duke in her little denim shorts, you have to love Bo and Luke. 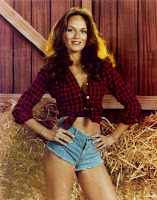 The laid back, country
style opening theme just fit in the freedom generation of the late 70's and early 80's. The theme song, by Waylon Jennings, made it to number 1 in the charts.
"Fighting the system like two modern-day Robin Hoods, Yeee-haaaaaaww!!"
9. Inspector Gadget
"Go Gadget Gooo!!"
I loved this show but the French loved it more.
The French loved this show so much, they released a music album called
"Inspecteure Gadget - Bande Originale de la Serie TV" featuring a track called "Sophisticated Gadget". I love the French.
8. Airwolf
This 80's TV series, with its cold war backdrop and at the hight of the synthesizer generation was genius. With the main protagonist, having probably the coolest name in history, Stringfellow Hawke, and the Supersonic Helicopter what else could you ask for.
7. Knight Rider
Let's be honest, you can't really go wrong with The Hoff can you?
A legend in his own right, this opening theme falls in line with Airwolf in the sense that we are introduced to two ridiculously good looking men behind the controls of super machines.
Michael Knight and KIT, introduced as "The Lone Ranger and his car" make a killer team, although I would have put it slightly different because I never felt KIT got his deserved acclaim. "Super car KIT and his curly haired, way too tight black jeans with leather jacket wearing sidekick".
6. Transformers
As a kid this show was very high on my Saturday morning priority list. Although I'm still bitter about the fact that my brother always got the transformer toys for Christmas and I got Playmobile. I didn't ask for them!!
5. Cheers
"Where everybody knows your name".
More popular with the North Americans than the Europeans even though the idea for the show was based on the British Fawlty Towers, this sitcom was a massive hit winning 28 Emmy awards. The opening sequence is a classic.
4. Fresh Prince of Bel-Air
Just about anybody who grew up in the 90's can recite the entire opening theme of the Fresh Prince. The Sitcom that 'made' William Smith was hugely popular with the younger generation of the early and mid 90's.
3. The A-Team
"If you have a problem, if no one else can help and you can find them, maybe you can hire..."
If Bo and Luke were the modern day Robin Hoods of their generation, then the A-team must be the modern day Magnificent Seven...except they're four. Irrelevant.
This opening is probably the most globally renowned opening theme to any TV series ever. Anybody and everybody has at one time or another hummed the theme song of this show.
Yes you have.
The A-team achieved cult status to the extent that in the UK the show has been aired continuously in some way or format since it's inaugural episode in July 1983. That is a quarter of a century in case you don't have a calculator at hand. But it is the shows intro that gave it it's status. Brilliant.
2. Friends
Running from 1994 to 2004 this brilliant, record breaking show contains one of the most recognizable intros of any show ever. Although the accompanying video changed with every season, the Rembrandts song will always be undeniably linked to Friends.
Also, am I the only spastic that always tries to clap along, to that quick little sequence early on in the song...you know the one I mean. The amount of times I still get that wrong is embarrassing. I think I should have paid more attention in kindergarten during 'clapping class'.
1. Baywatch
You just simply cannot argue with this.
I suggest you put your headphones on, isolate yourself from whatever it is that is undeniably less important than watching the opening theme of Baywatch with the music at top volume.
Just do it...
...now tell me that the feeling you get from that combination isn't better than anything you can possibly imagine. Well in terms of opening themes that is.
This opening theme goes a long way to explaining why Baywatch is, according to the Guiness Book of World Records, the all time most watched TV show EVER, with 1.1 Billion viewers!
The song "I'll be ready" by Jimi Jamison from Survivor however was not the original song to accompany the opening theme. That was "Above the Waterline" by Kim Carnes. The change was made for the syndicated series of the show and what a change it turned out to be.
Accompanied by Mitch Buchannan sucking in his chest, CJ blowing up her chest and my favorite, Shauni (Erika Eleniak) the Baywatch intro is an adrenaline filled masterpiece of sexual and musical genius. 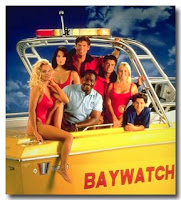