Although our trip did not turn out quite the way we had hoped, we still managed to get a taste of Santa Monica and the west coast of America. We also spent some quality time with some good friends who used to live just down the street from us in Maida Vale but moved to the California almost a year ago.

After 3 days in the office on Olympic Blvd we visited 3rd street promenade and the adjoining streets for some shopping. I love third street, especially at night when it really comes alive.
The only disturbing thing about the shopping experience is the overwhelming stream of headache provoking odor seeping out of the Abercrombie and Fitch store.
We visited the Griffith Observatory located high in the Hollywood hills which should provide a spectacular view of Downtown LA, however on this summer day it was hard to see the end of your nose due to all the smog. 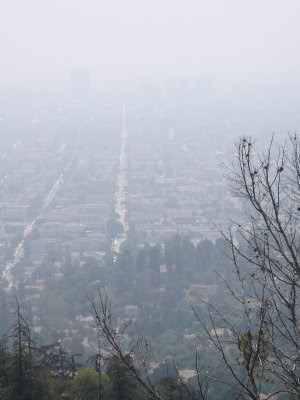 Shame really but none the less we were able to get a good view of the Hollywood sign which is inevitably a massive anticlimax. How exciting can 9 huge, white letters set in the middle of a desolate piece of land really be? I realise it is not so much the esthetic qualities of the landmark as much as what it symbolises but still, there are only so many angles you can photograph it from.
It was also nice to spend some quality time with good friends of hours who live in west hollywood.
Neil, Alice and Sofia took us to see some of the sites and shopping areas. The Grove in particular was good fun. You could easily spend a day there, shopping, eating and watching the fantastic musical fountain show that they perform every few hours.
On the weekend we took the rental car north up the coast to Malibu where we found a lovely remote little beach called El Matador. The perfect white sand beach to get away from things, read a book and zone out. The climb down to the surf can be tricky but it's well worth it once you get there. Situated in between some of the most expensive real estate of the Californian this is a little celebrity hotspot. 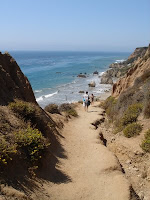 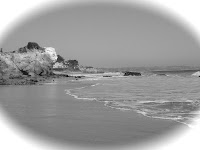 It was a nice way to end our short trip to the west coast and head back to a wet and dreary London.
Labels: Traveling