February 2nd 2009
London covered in a layer of white powder. Schools and businesses closed down. Everybody has a smile on their face. It kind of reminds me why we are "dreaming of a white Christmas" every year. 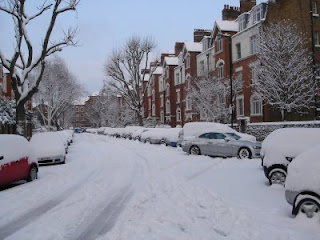 We went for an early walk in Paddington recreation ground where hundreds of kids were enjoying their day off. Snowmen were sprouting up everywhere. It is funny how 20 centimeters of snow can cause such a massive turn around in people's spirits. When I lived in Switzerland a regular dropping of snow in winter was more of an annoyance than anything else. Here in London however, where the last time this much snow was seen in the capital you'd have to go back 20 years, it's like everyone feels 10 years old again. I love it. 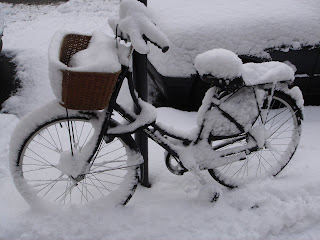 It all started o Sunday evening with the temperature dropping and the snow starting to fall. Soon the cars were covered by a thin white layer. By the time we went to bed this had increased to a good 5 centimeters and when we woke up at 7.00 am our garden looked like a miniature winter wonder land... 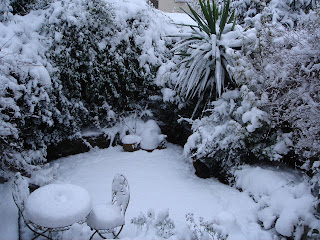 The london transport system received a fair share of criticism in its handling of the chaos that was monday morning. With all the busses out of service and just about every tube line ground 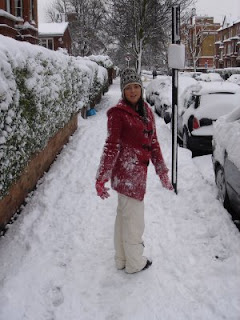 to standstill you can understand why monday the 2nd of February was more of a black monday instead of a white monday. I don't necessarily agree with the criticism though. You can't really expect public transport in a metropole like london, where a majority of the lines run over ground, to be prepared and able to respond to freak weather like we saw this week. Just like you can't expect Thailand to be prepared for a tsunami, this amount of snowfall is not really something you can anticipate or budget for in terms of staff.
The weather forecast predicts more snow for friday morning. If it means we have another picturesque wonderland like white monday, I say fingers crossed!
Labels: London Snow