London, February 23rd 2009
What an amazing evening of bigscreen entertainment!

Walking down the bright yellow carpet was an exhilarating and somewhat surreal experience.
The setup was spectacular, with huge poster boards of the superheros hugging the yellow carpet and 2 massive graffiti murals with scenes of the film on either side of the Odeon entrance. 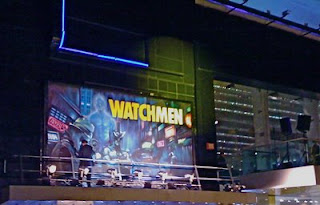 Once inside we got to meet Zack Snyder (Director) and his beautiful wife Deborah who introduced the cast of Superheros. Formalities out of the way and we could get started.
The movie is a lengthy 160 minutes of adrenaline filled action. The opening scene sets the tone for the rest of the movie. A jaw crunching, eardrum popping fight scene that sent shivers down my neck.

The fight scenes are brutal and graphic and not made for the faint hearted. Imagine Kill Bill but then better. Not having read any of the old Watchmen comics I did not know any of the story's characters but I don't think that matters. The protagonists are well developed and interesting. Particularly Rorschach, played by Jackie Earle Haley. Traumatised in his youth this vigilante has no fear and a somewhat skewed perception of right and wrong which gives him the troubled hero likability factor. 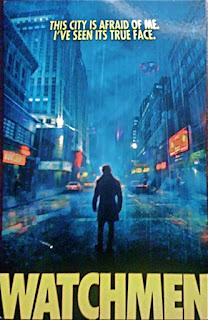 Another central character, Dr. Manhattan played by Billy Crudup, adds a more intellectual spin to the storyline. If you can get past his glowing blue manhood he might surprise you.
A few raunchy sex scenes add an extra dimension to the
otherwise pure action genre of graphic novel adaptations. It doesn't hurt that Malin Ackerman who plays Silk Spectre (Jr) gets naked.
The soundtrack to the film is superbly chosen from a mix of old classics. There is something awkwardly erotic about brutal, bloody fight scenes that are accompanied by music such as "Unforgettable" from Nat King Cole and the original German version of "99 Luftballons" by Nena.
All in all it was a super evenings entertainment and I want to thank my mate Jim who made the right decision in taking
me to the World Premiere of Watchmen.