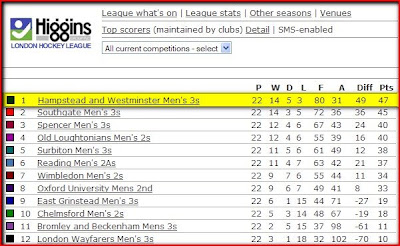 First of all I must congratulate and thank the Surbiton captain for being utterly useless.
Not only did he drag his team through London traffic for hours to absolutely no avail, he subsequently blew his teams chances of playing in the cup by believing he could get away with being a complete toss pot.

Since the start of the season in September 2008, all through the 22 matches and with a +49 goal difference we can confidently say we were comfortably the best side in the league and thoroughly deserve the title. We scored more goals than any other team and we conceded less than any other team in the league. With 7 (technically 6) shutouts, Vijay "the Pawar" has got to be on the shortlist for man of the season.

The season started brightly with 3 wins on the trot immediately nestling ourselves at the top of the table. We then fell into a pattern of 'draw one week, win the next' for the next 7 weeks bringing us up to Christmas. After the break we seemed to continue that pattern except the draws turned into losses and we looked to be losing our grip on the league. However a nailbiting 1-0 win at home against Southgate seemed to be the turning point that saw us storm to 5 consecutive wins and the title.

Now all that remains is for us to 'do the double' and win the cup with the semi-final against Old Loughts this Saturday at home. Come on the 1c's!
Labels: Hockey Sports