When the weekend weather forecast looks bleak, and it so often does in London, and you have nothing better to do (well, you do but you're too lazy to admit it), what better than a marathon sofa session watching your favorite action/drama series?!

When it comes to pure action and gripping drama there are few candidates that would make my list. Bare in mind there are a number of prime time action series I haven't seen, hence this is a rather biased list.

24
Jack Bauer is one of the most recognised television characters of the last 7 years. Jack has grown into a household name for this generation. A website of comedy "fictional facts" regarding Jack has even been created.

"Jack Bauer kills so many terrorists that at one point, the #5 on the worlds most wanted list was a kid from Malaysia that downloaded the movie Dodgeball."

Groundbreaking in its real-time style espionage action, the series has been incredibly popular with viewers. I love it because of it's fast paced twists and turns in the plot line. Even though the storyline is getting slightly repetitive and predictable after 7 seasons, the action is unrelenting and always spectacular.

The West Wing
Although more a drama than an action series this politics themed show revolved around the White House senior staff. The reason I like this show is because of it's quick and quirky dialogue. Touching on real issues I would imagine it gives a decent account of how the white house staff deal with day to day crises. Although I have not seen all of the 7 seasons of the show I would have to rate it high on the list.

With little in way of action the success of the series lies solely with the performances of the individual characters that mould the stories. In The West Wing the characters are interesting, funny, intelligent and well developed and hence the show flourished.

Lost
I have never been tempted into watching Lost although I might yet in the future.
I have heard mixed opinions on this action drama adventure series. Most people either love the show or find it excruciatingly annoying for not tying up any loose ends. Every episode leaves you even more "lost", excuse the pun, causing the whole experience to be rather frustrating. However all in all this thrilling series is one of the most exciting shows to hit the screen in the last 10 years.

Heroes
This fantasy drama series has really taken off. Season 4 has already been planned. Cleverly linked subplots are thread into the overall storyline, similar to Lost. What makes Heroes more enjoyable than Lost in my opinion is the fact that in Heroes the majority of the cliffhangers are dealt with and not left unanswered and so each episode seems to bring some mystery to a satisfying conclusion.

The characters are young, sexy and interesting.
The character development mind you is not nearly as compelling as in The West Wing but the show makes up for its lack of intelligence by great action shots.


Fringe
New blood. The modern day X-files with a slightly more continuous central story line. With the same producer as the successful Lost series, the individual episodes are inevitably prone to dead end cliff hangers but on the whole Fringe is a thrilling science fiction rollercoaster ride. Being a man of science I particularly enjoy the theme of the show however far fetched it may be. It will be interesting to see how they approach season 2.


On top of the above shows there have been a host of other great action series through the years that should be mentioned.

For me however "24" tops the all time list. Although the later seasons have fallen into a dangerous repetitive nature where viewing becomes more a game of who will guess the mole in CTU first, when will Jack go rogue and how useless will the FBI swat teams be this season, the outright excitement of those tense minutes booming away makes 24 a clear winner for me. 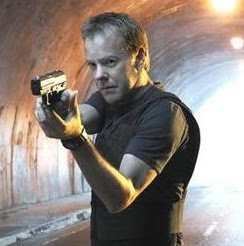 Let me know what you think.
Labels: Entertainment TV