Now I'm not a religious man but when describing the victory of the Netherlands over England in the ICC Twenty/20 Cricket World Cup, the story of David defeating Goliath in the valley of Elah seems somehow fitting.

The opening match of the 2009 Twenty20 world cup. The Minnows vs Giants of the game. The Orange Amateurs vs the Hosts. The clueless vs the wise. David vs Goliath.

I'm sure that when Goliath stepped into the valley of Elah and looked upon David he chuckled to himself and thought this could get ugly but at the same time hugely entertaining for my fellow Philistines. Little did he know David was not thinking, 'My aren't you big, ugly and scary', but more something along the lines of, 'The taller you are, the harder you fall'.

I would imagine the Dutch cricket team thought something similar although with the added incentive of playing at the home of cricket, Lords. England put up a competitive total of 163 runs which at first sight would have seemed like a mountain to climb for the boys in Orange. How the world of cricket would be proven wrong. A blistering start and a careful approach through the middle overs brought the game down to the final over, and what an over it was. With nothing separating the two sides at the start of the 20th over the winner was harder to pick than a broken nose. One wicket for England and the dream would have been over. One huge six and the dream would instantly become reality. Alas neither of those happened.

At this stage I had destroyed our finest bottle of Beaujolais through pure tension and excitement. It was a sad sight. Friday night, me, in the kitchen, a bottle of wine, watching cricket. However it must be said that the final over was played, as BBC's Oliver Brett put it "...amid scenes of scarcely believable drama".

Stuart Broad bowled the last over and pinned down the Dutch boys Schifferli and Ten Doeschate deep in their crease. Needing 2 runs from the last ball Broad bowled another length deliveri. Schiferli had a wild swing at it, sending back towards the bowler. Broad collected...incredibly, at this stage, after the last ball had been bowled, all 3 match results were still possible. If Broad takes aim at the stumps and connects England win. If he stands up and prevents a second run they head into a sudden death final over. Yet incredibly Broad choses the 3rd option. He aims at the stumps, misses and allows the batsmen to come back for a second run from the overthrow. After that Lords was painted Orange. 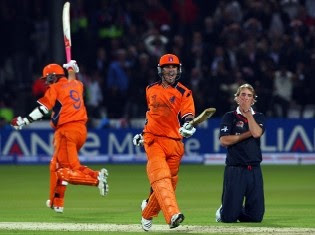 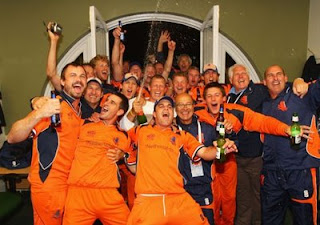 What an end to a brilliant game.
News of the win quickly filtered accross the channel and the remarkable story was on the back of all the national papers the next day.