There is nothing quite like getting one over on the Aussies. To frustrate them, annoy them and watch them lose when they are so arrogantly convinced that they'll win. Now I'm not English but I've lived here long enough to take every bit of pleasure out of such magic moments.

The look on Ricky's face when Chubby Mc Chubberson (English Physio) hobbled onto the pitch for the 4th time in 2 overs was priceless...look at him! 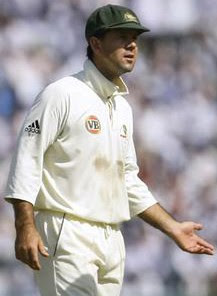 Although we didn't end up with a winner from the first Test, the final 2 hours of play were as butt clenching as ever. Having dominated the entire test, Ponting's boys, probably thinking they would wipe England like a dirty arse, just couldn't get rid of the tail, wagging away, fighting off the Australian attack. Ponting threw everything at them. He even opened the cage and let loose Peter Sizzle, a woodchopping, E-popping animal that reminds me of that famous Australian marsupial, the Tasmanian Devil or "Taz"as he was lovingly known... 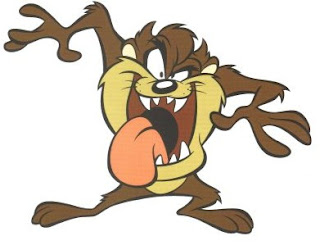 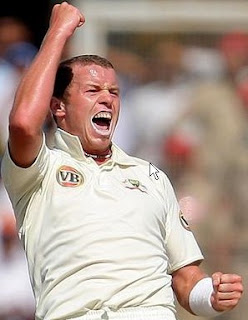 Similar to the Old Trafford test in the 2005 series, when Brett Lee blocked the last over to get a draw, this result sets the rest of the series up nicely. Battle resumes at Lords on Thursday.
England have a super record against Ausatralia at Lords evident from the fact that they haven't beaten the Kangaroos there since 1934...

Lord's normally being the ground that kicks off the English cricket summer, Punter has his views about the ECB changing the lineup for the 2009 Ashes:

"There was a fair bit of talk about it last time, starting the Ashes at Lord's, given our record. This time around, it will be the second Test match, and I've got no doubt they changed it on purpose."
Grumpy #&$*#

Steve Harmison has today been named in the 14 man squad for the second test in case Freddy's re-injured knee breaks in half. Although this might add another 50 runs to the Aussie innings in the extras column, Steve also has the ability to take Ponting's head off with one of his bouncers. Hence, worth it.

Well, the bully boys have had their toys stollen and they want them back.
What's the weather forecast for the next 5 days....?

Andy said…
Chubby McChubberson is currently my favourite person on earth. The way he waddled out to the middle, then tried to put his biggest confused face on as if he didn't know where he was, then turned and headed back is pure comedy. Ponting's face was also pretty good! :)
14 July 2009 at 09:30