Something different. A great film experience and a return to the big picture cinema storyline. The marketing of the film as well as the cinematography are reminiscent of The Blair Witch Project, a film that broke new ground with it's low budget viral marketing strategy to promote the film.

Before watching the film I was still very much unaware of the plot. I remembered seeing trailers of Manhattan being destroyed. I also hadn't picked up on any of the carefully released information online about the possible plot and cause of the destruction. I think, if executed properly, this type of film release can really ad to the anticipation and experience of watching a film. The film itself obviously also needs to deliver.

Cloverfield delivers. It delivers on suspense, visual effects, sound and uncomplicated monster fun. The style of the filming (cinéma vérité) allows the viewer to really get into the action and makes you feel like you are actually there in the midst of these hellish scenes. 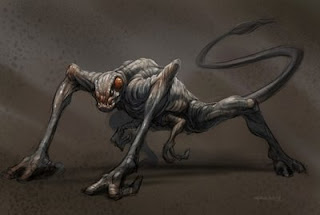 I also thought the casting of "Hud" (T. J. Miller) was ingenius. An unknown actor with natural wit added an extra dimension to the chaos. He has comic timing without sounding too scripted and straying from the style of the film. The other actors in the film are not great but not bad either.

The monster (Clover) is great. He's a real looker. He's a baby version of...well that species of deep sea monster, alegedly. The visual effects supervisor and the film's producer wanted to create the feeling that the creature was acting more out of fear than out of unsolicited agression....whatever. It's big, it's scary and it's flattened all of New York City, who cares if it's supposed to be a baby clover or big daddy?! Whether it is or not is neither here nor there and adds nothing to the story either way. I mean, look at him.... 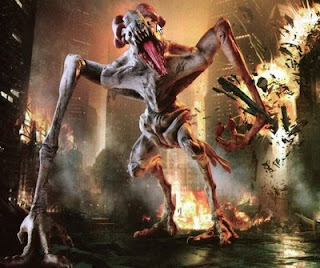 Anyway, I enjoyed the film and if you haven't seen it, well I've pretty much ruined it for you now I guess. Although without the knowledge of what's actually behind Cloverfield it's still a great film.
Labels: Entertainment Film