I am currently reading a book by Thurston Clarke called "The Last Campaign". An amazing account of Robert Kennedy's campaign for President in 1968. 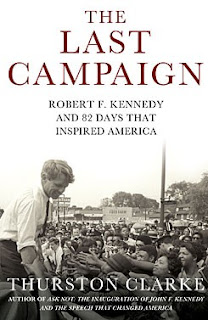 The story of Bobby Kennedy is extraordinary. The emotional rollercoaster that represented his 82 days of running for the presidency was truly inspirational and exceptionally tragic.
He created an amazing belief and hope with the American public at a time when the country was in real turmoil. The Vietnam war, poverty and racial inequality were tearing the country apart. Yet Bobby was able to cut through all this desperation and light a fire within the American people. Take responsibility and make a change happen.

Before I read the book I knew little about the intricacies of his campaign and how he was perceived by the public before his assassination. I knew he was an inspirational speaker and a brash and brave politician, but not for example how hated he was by his fellow democrats. The tension within the party is highlighted very well in the book and provides an insight into how courageous Bobby really was when announcing his candidacy.

I haven't read much political literature but this one has really grabbed hold of me. I would recommend everybody to read this book. Not only is it an immensely interesting read, it also provides an eye opening comparison to the campaigns run by today's presidential candidates.
It is hard to imagine that there will be another candidate as inspirational and courageous as Robert Kennedy was in 1968.