Bottmingen, Home of the Greatest Tennis Player of all Time 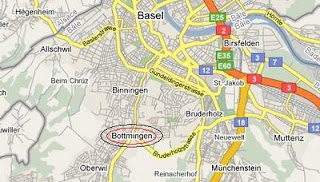 I grew up a stones throw away from the greatest tennis player in the history of the game. If Roger Federer can win his sixth Wimbledon crown this Sunday and reach 15 Slam titles he must be acknowledges as the greatest player to have picked up a tennis racket.

I probably bumped into Roger in the local supermarket any number of times without realising what an awe inspiring sporting genius he would turn out to become. I even had tennis lessons at the same club where he laid the ground work for his future success. It's funny how two young boy's lives can take such unrecognisably different journeys. It's really rather depressing if I'm honest.
I really hope he achieves what so clearly means the world to him. Very much aware of the records he has broken and the potential milestones he can still achieve, Roger Federer is the ultimate champion, on and off the court. And regardless of whether he is going to father a little boy or a girl, Federer Jr can be proud of their daddy superstar.
C'mon the Fed Express!!
Labels: Sports