England were flying, the Aussies were reeling. Ponting was fighting to stay alive in another extraordinarily dramatic Ashes series...

...One sleepless night, a broken knee and a back spasm later and everything has changed. The green caps have put the lions back in their place, dominating the 4th test reminiscent of the 2006-07 series down under. Men against boys. It was about as one sided as a wrestling match between me and my girlfriend. England's middle order was so utterly useless you might as well have stuck Gordon Brown at 3, Katie Price at 4 and Harry Potter at 5 and I'm fairly confident that would have produced more runs than England got out of Bopara, Bell and Collingwood. 16 runs to be exact. In the 2 innings that England tried to bat, the top 6 "batsmen" scored a total of 170 runs and the bottom 5, bowlers, scored 152. Or you can look at it this way, Stuart Broad and Graeme Swann individually scored more runs in 1 innings than any of the top 6 in both innings.

The fact that Freddie "England's only Hope" Flintoff was left out due to a knee, that has been punished so severely it will either just fall off or have to be amputated after the Ashes series, didn't help England's cause. Freddie is the heart and soul of the English team. He needs to be selected for the final test at the Oval whether he can stand on his knee or not. If Bopara needs to give him a piggy back for his bowling run up, so be it. That way Ravi can at least contribute something in this Ashes series. Now I'm not someone who likes to see a team depend so heavily on one player but in this case you'd have to accept that an England with Flintoff has some fight, agression and arrogance about it, whereas an England without Flintoff resembles a wet rag, weak and soulless.

Probably the most demoralising fact about the outcome of this last test from an English persepctive is that Justin Langer's Dossier leaked to the Telegraph, highlighting England's weaknesses and individual player's flaws, was brutaly accurate. 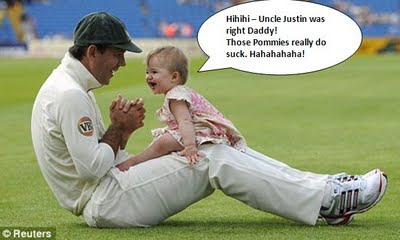 England need to regroup and they need to take Langer's dossier as a motivational tool. Each individual within the English team needs to shove his hand down his cricket whites, find his balls, shine them and toughen up for the biggest test match in their careers. This could be epic. A one match test series. We couldn't have asked for a more fitting end to the Ashes series 2009. All we need now is the weather to play along and one of the England players to stand up and be crowned a hero!