When Legends Return to the Game

The Competitive addiction of Sporting Genius

Michael Schumacher announces his return to F1 racing after Massa's accident at the Hungarian GP only to abandon his comeback a week later due to a dodgy neck. For many this will represent 2009's biggest sporting anti-climax but let's be realistic, was Schumacher's potential return to the track ever going to live up to the hype? Probably. Performance wise? Unlikely.

His announcement to come out of retirement, whether it's out of necessity or for personal reasons, isn't the first and will not be the last we've seen of sporting legends trying to turn back the hands of time. When it comes to sporting legends I have been lucky enough to have seen some of the greatest sports stars of all time. Michael Jordan, Tiger Woods, Roger Federer, Valentino Rossi, Michael Schumacher. A number of these legendary icons of their sport have not been able to stay retired and felt compulsed to venture back into the unknown. Put their reputation, in some cases their lives, EVERYTHING on the line for one, just one more moment to be able to say, I'm the greatest. 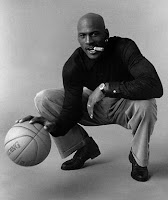 Michael Jordan fell to the temptation twice in his career. Once after a brief unsuccessful attempt at playing minor league baseball. Returning to the windy city her recaptured his magic and stormed to 3 more NBA titles. However the second time he retired (really the first retirement) everybody thought we had seen the last of the best player ever to play basketball. Alas, struggling with retirement, unhappy with the simple fact of getting older, in denial, he decided to return once more. Get it out of his system. Although not embarrassing himself, leading the Washington Wizards in most offensive stats and filling just about every stadium he played in he never regained any of his former glory.

This summer we also saw Lance Armstrong make a comeback at the highest level of cycling. In his prime Lance was a machine, able to accelerate away from the best cyclists in the world up a vertical wall. In retirement he spent most of his time focusing on his Lance Armstrong Foundation and had a short affair with singer song-writer Sheryl Crow as well as a number of other girls including Kate Hudson. His fight for cancer awareness with Livestrong was one of the reasons for his comeback, but let's be honest, the main reason for his comeback was that he missed the sport and the annoying itch in his legs asking the question "Are you still the best Lance?", "Can you still get up the Mont Ventoux and compete with the best?".

It takes something very special to transcend your sport. To be unrivaled, untouchable. To achieve things that will possibly never be equaled again. It is these people that have a primal and indescribable desire, a competitive drive that they feed on. A love addiction that ignites their soul and something they simply can not live without. When Michael Jordan announced "I'm Back" in March 1995 he had suffered enough. Watching the young guys running the NBA and seeing his Chicago Bulls not reaching the finals renewed his motivation and his desire to prove to the world, but mostly to himself that he still had "it". This was what he wanted to do more than anything else in life. His soul was still out on the court, his joy in life was playing basketball, nothing else.
And that right there is what I love about sport. I mean, how many people can honestly say they just have to go back to work after retiring, for the love of what they did?! A competitive instinct that they're born with can not be simply turned off like a tap.
These people just don't function when they're not playing their sport. Even though they know that it is time to call it a day and retire they just can't step away from the game, they don't seem to know what do do with themselves, they get depressed. Studies carries out by a group of Spanish psychiatrists have shown that the rate of divorce, alcohol and drug abuse increases substantial a year after an high level athlete retires from their sport.
" When a person stops high-level competition and loses the media attention" and that of their sporting entourage, they undergo a difficult transition period, a "retirement syndrome"
Whether Schumacher ever returns to the track or not is yet to be seen but the excitement reverberating around the world when he made the announcement was palpable. What is more exciting than seeing the biggest, retired star in any sport pitting himself against the new "young gun" generation. It might have been epic, but then again he might have had to retire after 1 lap.
Let's just hope George Foreman doesn't announce he's coming out of retirement again, for his own sake.