They are amazing little carnivores. Good climbers, accomplished swimmers and renowned as exceptional washers they have an amazing sense of touch. 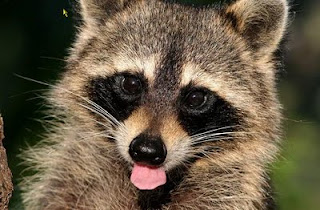 I got up close and personal to one of these sweet little (not that little actually) rascals named Punjab at my friends house in Kettleby, Ontario. Mother G was taking care of the little fellow as part of a rehabilitation program coordinated by the local wildlife rescue centre. Punjab was the naughtiest little thing I'd ever seen. He would change the channel on the television when we were in the middle of a game of Goldeneye on the Nintendo 64. He would pull your hair, drink your milk and climb all over the furniture around the house. 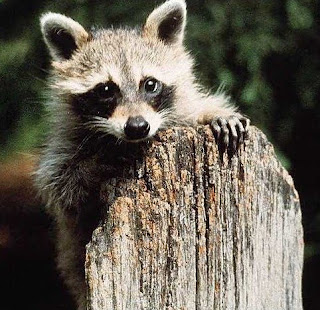 A few facts about the Raccoon:

Raccoon (Procyon Lotor)
The name Raccoon stems from the Indian name Aroughcun (the one who rubs, scrubs and scratches with his hands) and has come to stand for Curiosity, Dexterity and Disguise. Their scientific name, Procyon Lotor is derived from pro- "before", cyon- "dog"and lotor - "washer".

Raccoons are one of the few mammals that can climb down trees headfirst and they accomplish this by turning their hind legs almost 180 degrees.

Raccoons can lose body heat by both panting (through the tongue) and sweating.

Over 60% of a Raccoons cerebral cortex (the part of the brain that is involved in memory, attention, thought and perception) specialises in deciphering tactile impulses. This is more than in any other animal. 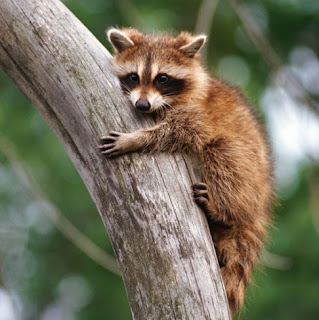