Where can you buy Field Hockey equipment in London? 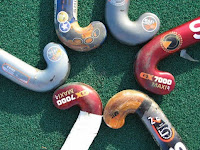 When it comes to buying hockey gear in the capital, downtown is not the best place to start. I have always bought my sticks, shoes or other equipment at home in Holland and have never realised just how poor the options are in London. You're not doing well as a hockey retailer when London customers best choice seems to be Lillywhites.

A far better range of accessories can be found at The Proshop in Brentford or Ceelect (The Hockey Centre) near Clapham Junction. Although even these outlets aren't great.

The best option for hockey players in London to buy their hockey equipment seems to be the
internet. Not ideal when buying shoes or a stick.

This lack of outlets seems strange when you think about it.
There are currently near enough 114,000 active (registered) hockey players in England. With a massive influx of youth players over the past 6 years we now have more than double the amount of active players than we had back in 2003.

Of the 1,050 hockey clubs in England a large number is located in and around the capital. With the England mens side winning the European Championships and the London Olympics on the horizon you would expect hockey equipment to be a whole lot more accessible!

Hopefully this will improve in the run up to 2012.
Labels: Hockey London Sports