At my American company Halloween is taken seriously. Celebrating the end of summer, this Celtic festival is popular with our transatlantic neighbours and hence a big dress up party is in order. I'm not much for dressing up and when I do I usually offend people but I figured I should make an effort this year. These days there is no dress code when it comes to Halloween so I figured I'd just try and look, well "scary". I think I pulled it off... 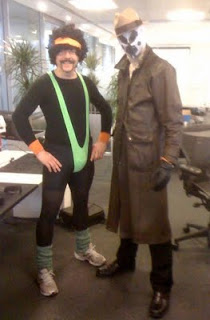 There were some impressive costumes on display. Rorschach standing next to me in the photo above for example was one of my favourite. Although not many people recognised the character from the Watchmen comics and the film adaptation of which I went to the premiere back in February 2009.

There were some other really good costumes including a group of 5 girls dressed all in neon. 'Say No to Neon'. 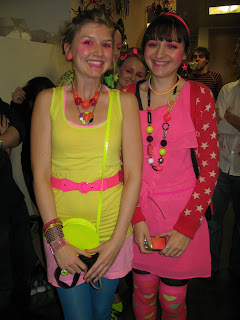 It's not often you can go to work dressed up like a complete tit, get bungalowed, eat pizza and play table tennis. Nice.
Labels: Entertainment Fashion