Inuksuk - Symbol of Hope and Friendship

The logo of the 2010 Winter Olympics in Vancouver is an Inuit symbol of guidance. Inukshuk, meaning "in the image of man".

In the Canadian Arctic, a rugged, vast expanse of wilderness the Inuit people would stack rocks into this human form to create a steadfast guidepost providing direction and hope in an unforgiving environment. The man made structures were also used to guide caribou into designated areas for harvesting and on shorelines to navigate ships into open channels.

The thin, horizontal rock representing the Inukshuk's arms functions as the directional indicator, where the longer arm points in the direction one should travel to. Some Inukshuk also have a hole in the middle, "body" rock where if looked through one should see the next Inukshuk to travel to. For the Inuit this would help guide them through the treacherous mountain terrain.

The Vancouver 2010 emblem, called the Ilanaaq is actually a modern interpretation of the original symbol. It is the Inuktitut word for friend and represents Canada's friend, welcoming the world in 2010.

The emblem was designed by Elena Rivera MacGregor and has caused a fair bit of controversy amongst the Inuit community. I personally like the emblem. It's simple and has cultural significance linked to the country's past. It symbolises cooperation and the human spirit, in my view 2 strong messages that the Olympic games have always promoted. 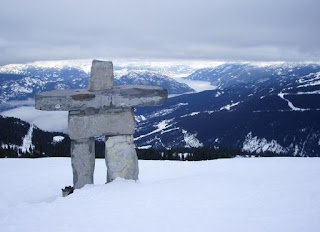