World Cup Fever is slowly building up for this Summer's tournament. The excitement is growing with the fans and the players. With the bookies England's odds are shortening every day until the weekend before the tournament, when, I'm sure they will be clear favourites to be crowned World Champions...Priceless.

On the media and merchandising front things are heating up as well. And my favourite big football tournament piece of merchandising has got to be the Panini sticker book. 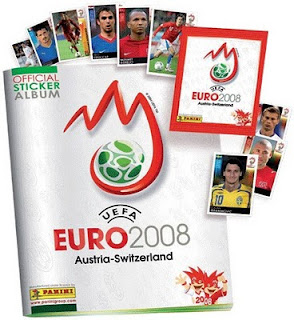 Earlier this year Fifa and Panini came to a new agreement, allowing the collectors publisher to cover the 2010 and 2014 world cups.

Going all the way back to the world cup of 1990 in Italy when I was just 10 years old, way before the playstation had been invented and before I found my fathers collection of Men's Only, collecting the stickers for my Panini album was a roller-coaster ride of fantastic highs and deeply disappointing lows, right up to the start of the tournament.

Saving up my pocket money so I could buy as many sachets as possible. The actual physical anguish you endured finding out you had Lothar Matthäus double. Nobody will trade with me for Lothar Matthäus!! Everybody has him!!

How times have changed though. "Kids nowadays" rather spend time playing video games and showing off their new smart phones. The romance of collecting and trading for your Panini sticker album has died with the times....

BUT NOT FOR ME!!!
I've already been asking around my local newsagents when they are expecting the albums to arrive. Come on the Neds (Panini lingo for the Dutch players)!!
Labels: Entertainment Media Sports Summer World Cup 2010