There are two kinds of cyclists in England.

Both are equally handicapped but the Racing Idiots are more annoying. These are the idiots wearing Lycra cycling shorts, super tight cycling vests and helmets pretending to be in the tour de France everyday, when in reality they wouldn't last half a day on one of the flat stages of the Tour. 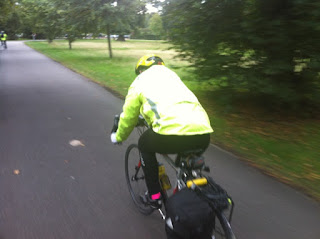 They hunt in packs and crawl up each others asses (because they heard about 'slipstreaming' on Eurosport), shouting at normal cyclists to get out of their way so they can proudly arrive at the office 2 minutes earlier, sweating like a fat girl writing her first love letter because it's the only exercise they have done since that day they chased after that pigeon at the age of 3.

I have many good English friends who know much more about bicycles than I ever will but they still weren't born with the cycling gene, and thus, they are cycling idiots.

There seems to be a complete misunderstanding in the UK as to what the bicycle actually represents. It really is rather simple if you ask me. The bicycle is a form of transport. It gets you from A to B, just like a car allows you to do. This fact hasn't quite sunk in yet for the cycling public over here.

The fact that the British Cyclist still sees cycling as a form of exercise and/or a macho status symbol has it's roots in the English culture. The English love to throw themselves at every new fad and make sure that everyone knows about it too. I used to have a house mate who epitomised this very English character trait as he jumped on every new left wing bandwagon, spreading it's clichés like he was a born believer, only to abandon it 3 weeks later and become a dedicated Fruitarianist and so on.

London has fully embraced the bicycle over the past few years thanks to Livingston and now Boris. The new Boris Bikes scheme is nothing new as it was adopted by many European cities in the past. It is however a very good idea and a very good way of re-emphasising that the bicycle is a mode of transport before anything else. The Boris bikes are real beasts and don't work in the hands of racing idiots. That's a good thing.

The only thing that London needs now are more designated cycle paths, and I don't mean white lines painted on the roads but proper cycle paths, separate from the road. I realise this is unlikely to happen in such a densely built up metropolis as London but I think a decent attempt needs to be made. Hopefully as this develops and a cycling culture starts to grow, the racing idiot breed dies out and the British cyclist grows up.
Labels: Holland London Sports Traveling