The unfolding Lance Armstrong story is a weekly drama on par with the TV series 24. There are actually a number of striking similarities between Lance and Jack. Let me run you through them.

1) Both are seen as good wholesome American hero's.
2) In season 3 Jack Bauer, like Lance, struggles with a drug addiction he's finding hard to shake.
3) They both have to tell lies to reach their objectives.
4) Both stand accused by their peers and hunted by the law leaving them without many friends.

I could keep going but I think you will agree Lance is the Jack Bauer of the Peleton. 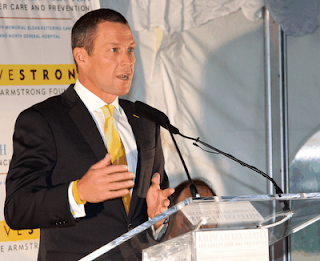 The whole fiasco is starting to resemble "I did not have sexual relations with that woman" and we all know how that finished.

Tyler Hamilton, one of Armstrong's work horses during his tour victories has made loads of money for coming on national television claiming Lance was doping regularly. Behind closed doors George Hincapie has allegedly ratted on Lance to the federal investigators as well. These allegations must hurt. This is comparable to Marcus Junius Brutus's betrayal of Julius Caesar, his nephew. Brutus conspired against Caesar because he didn't like his "king like" behaviour and thus arranged his assassination. Too dramatic of an analogy? Possibly. But that's how it must feel to Lance.

This must also be hard to take for the US fans of the tenacious Texan. A beautiful story and an amazing role model for their double cheeseburger and fries (make it large) devouring children to look up to, destroyed.

Whether Lance Armstrong is exposed in front of a global audience or not, there is however a much larger picture to keep in mind here. Livestrong has raised near £200 million for cancer research. Not that one excuses the other but let's not get carried away by some possibly dubious sporting achievements when the man's financial contribution to medicine could find the future cure to one of the most devastating killers in the history of human kind.
That's Dramatic!
Labels: Cycling Entertainment Sports