Monday morning was an early start. We needed to get to the town centre seeing as we booked a coach that would take us to the Mersing in Malaysia, a small coastal village that provides the gateway to Tioman and the surrounding islands in the South China Sea.

The border crossing from Singapore into Johor, Malaysia was a little bit of a mission and the bus seats weren't quite as luxurious as the travel company's website claimed. That however is the charm of traveling around those parts of the world.

The fun really started once we were getting closer to Mersing, driving along the winding coastal road through what can only be called swampy rainforest. Drives had clearly just watched The Fast and the Furious 5 with subtitles and was hoping to star in The Fast and the Furious 6 because he accelerated at the apex of each corner and spent more time driving onto oncoming traffic than camping in his own lane. He was overtaking anything and everything in his way. He hit one bump so hard we had to peal the local old lady, sleeping in the back, off the ceiling. Good fun.

Once we got to Mersing we had approximately an hour before our boat left for the island but seeing as there really isn't anything to do in this fishing village we happily sat there like tourists waiting...

When the ferry finally left Mersing we were grateful seeing as we had read stories of unpredictable tidal behaviour that caused some boats to turn around before they even left the harbour. The journey over choppy waters took around 90 minutes, stopping at a number of jetty's around Tioman island.

Having stopped at a number of jetty's jutting out from the island, dropping of a sparse number of tourists we arrived at our destination on Tioman. Waiting for us was a open top minibus that took us to the Berjaya resort. On the way we ran into a number of naughty monkeys and a group of monitor lizards lurking around the side of the road.

Once we arrived and had found our bungalow we immediately unpacked and headed for the beach which was 10 meters from our front door... 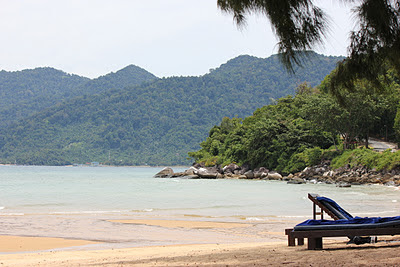 Berjaya has it's own 18 hole golf course which I obviously felt obliged to test out. It was completely desrted and there was only 1 other group of local business men ahead of us. Charlie was an exceptional caddy, just a shame I was such a poor golfer!