Tourist Thursday.
Today we set out on a little city tour of Singapore. Our first stop, at the advice of our hosts, was the National Museum of Singapore at Fort Canning Park.

A beautifully colonial (1887) building that has seamlessly integrated modern architecture throughout its structure. Located at Fort Canning the museum was initially opened as the Raflles Library and Museum.

The museums permanent exhibition, The Singapore History Gallery, is a fascinating and detailed trip down Singapore's young history. From the 14th century to today's bubbling present. The most fascinating bit for me was the Japanese occupation during the second world war mainly because I have read a number of books on that part of South East Asian history. The gallery is displayed in a fascinating story telling, meandering way that allows you to chose between the main thread of Singapore's history on one side and the more personal tales of individuals telling their version of Singapore's history through another.

After the museum we walked back towards boat quay, past the houses of parliament and the old house of parliament. We had a quick drink there and then headed along the waterfront toward The Fullerton Hotel. 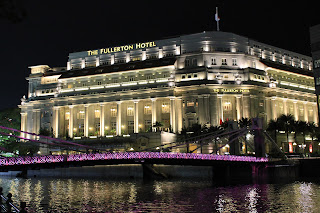 
“Lantern derives its name from Clifford Pier’s historical Chinese name - “
Red Lantern Pier”. It was a landing point for Singapore’s first
immigrants and red lanterns used to hang from
the pier as a guide to seafarers.”

With brilliant views of Marina Bay and directly opposite Marina Bay Sands Hotel we had a bit of food and a few drinks at this amazing rooftop bar. 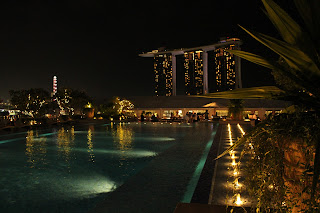 In this particular picture Charlie is rather amused at my clumsy, backward stumble off the lounger into the glass railing... 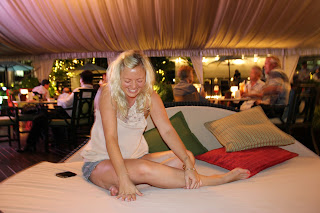 After a few cocktails and some bar food we headed back, along the race track and stopped off at a cool little bar just by the bridge (Fullerton rd) called the Boathouse. 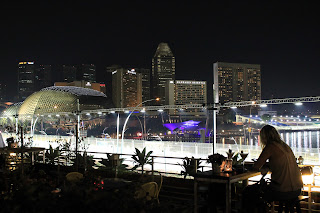