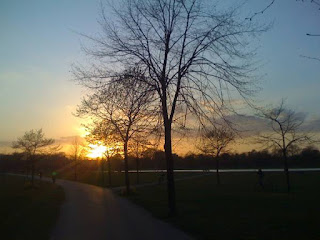 My morning bicycle ride into work takes me through Hyde park for most of my journey and is one of the most enjoyable bits of my daily routine. This is mainly because I am usually escorted along the way by an overexcited flock of Ring Necked Parakeets. These lively little chaps have made the south east of England their home away from home and they are clearly enjoying themselves!

Rumoured to have established themselves here by escaping from the film set of The African Queen in 1951, starring Katherine Hepburn and Humphrey Bogart, they seem to be happy enough to endure the miserable English winters. 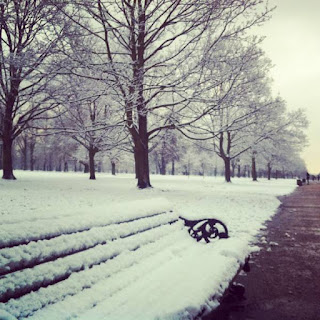 This of course is no mere coincidence but in actual fact Darwin's evolutionary ideas in motion. There is clearly something beneficial that has allowed them to flourish so far away from their natural habitat. They have adapted to their new surroundings and been able to thrive. Whether it is foraging for new and different food sources or outcompeting their new avian neighbours for other resources such as breeding territories, these birds don't seem to have too much trouble fitting in.

The fact that they do so well in the English winters is not altogether a miracle seeing as they are native to the foothills of the Himalayas, where their food supply consists of berries, nuts and fruits all readily available on the British isles. They are above average sized birds in relation to the British birds and so that also helps them in holding their own with the rest of the local bird population. Some recent studies have actually shown them to "bully" local birds out of their territories and their nests. Unfortunately these studies were called for by the government to assess whether to legalise culling of the now approximately 30,000 strong population.

Personally I think the Ring Necked Parakeet is a lovely addition to the British countryside and my daily journey.

What do you think?