My first trip to White Hart Lane.
My adopted London football team. Tottenham, were playing at home against Norwich City at 3pm.

At the opening of the Wilton Gallery, a photo gallery setup by Charlie's brother, I was lucky enough to have met Benoit Assou-Ekotto's girlfriend, Sally, who kindly offered to take me and a friend to the game. We arrived at the stadium just before kick-off and received our tickets and players lounge wristbands. We were coaxed into the stadium through the players entrance and were led to the seating area for the players family and acquaintances.

This was the view from where we were sitting... 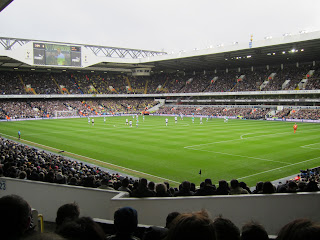 Benoit had a good game even though Tottenham ended up losing 2-1. They did come back from 1-0 down courtesy of a fantastic finish from Defoe in the 33rd minute and went into half-time tied at 1-1 but it was not to be. After going 2-1 down Benoit's manager joked about me never being allowed into the stadium in future because I was clearly bad luck. He seemed to think that was terribly funny so I'm not too worried that he was actually being serious...


At half time we were offered sandwiches and drinks and after the game we had some more food and drinks in the players lounge. It was neat to see some of the players come in and meet up with family and friends. Sandro Raniere Guimaraes Cordeiro (or simply Sandro... he speaks Portuguese) came in looking über cool with his cap on back to front. Benoit came in complaining "très fatigue...".
I was tempted to say "hey Benny, keep your head up buddy, at least your bank balance isn't looking too tired!". Probably best I didn't. Anyway, what a genuinely nice guy. Although I only met him and spoke to him for a short time he is clearly not moulded from your normal footballers brand. Unpretentious and genuine. Breath of fresh air in a sport drowned in hypocrisy and greed.