For my second Olympic experience I was invited to watch a session of men's preliminary round volleyball at Earls Court. The first game was between the Great Britain and Australia. 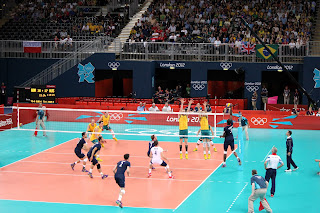 The fierce Commonwealth rivalry ended in the boys from down under prevailing 3-0. The atmosphere was fantastic inside the arena. Every point cheered to the rafters. It must be said however that the GB squad looked a little like a bunch of girls playing catch.

The second match, a much more appealing showdown, was between Russia and Brazil. These two powerhouses pummelled each other for 3 long sets but Brazil came out on top after some brilliant defensive play from Sérgio. Some of his digs were amazing. 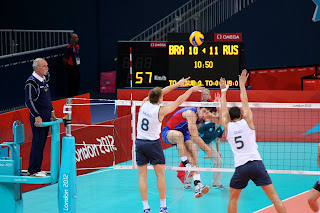 As would later turn out this was also the Olympic volleyball final matchup! The standard of play was just incredible. These guys were jumping head and shoulders above the net.

The winning point for the Brazilians...