The Sky is the Limit


People don't look up anymore these days. Too busy checking their emails and updating their Facebook status, rushing around with their heads down. Especially in London.

A real shame because there is much to be seen up high in the sky. In such a densely built up metropolis as London, some of the most fascinating and surprising real estate is to be found above eye level. London has an amazing collection of roof gardens for example, including the pretentious, yet beautiful Kensington Roof Gardens.

There is ample evidence that London is pushing for a greener ceiling. In 2013 the GLA and Green Roof Consultancy produced a "green roof map" of London by studying aerial images of the capital, highlighting the extent of the green revolution!

Hollywood has also come to the London roofs. The Rooftop Film Club has well and truly taken off. Incorporating locations such as Kensington, Shoreditch, Peckham and Stratford, you can now watch a blockbusters such as Top Gun and Dirty Dancing up where the air is thinner. 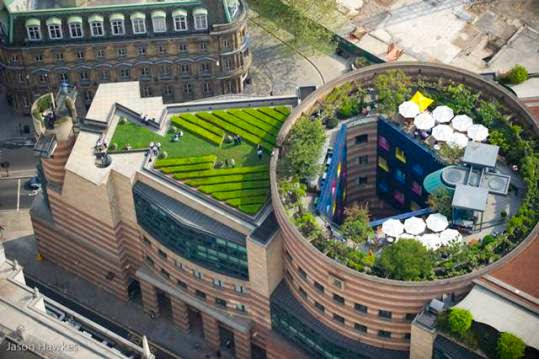 With the world population ever increasing the dwindling space on the face of the planet will force us to build up rather than out and the need for sustainable, green living space will increase year by year. It reminds me of Sim City where the more futuristic your city becomes the more your city is built vertically...

It will be interesting to see what kind of structures the worlds architects come up with in the future!