You know you've been in London too long when the sight of tourists trying to seduce grey squirrels in Hyde Park makes you cringe. And it's not because of your dislike of tourists, or your cold heart. No. It is because you know those little, grey servants of the devil, those disease infested flying rats displaced the beautiful, resplendent and indigenous red squirrel. 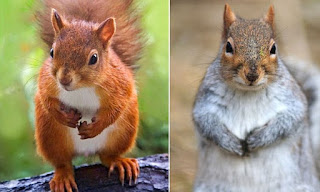 The greys also carry a virus called Squirrel Parapox which doesn't affect them but kills red squirrels. Their increased numbers in certain areas of the UK has caused them to be categorised as a pest.

Native to North America, the grey squirrel is bigger, fitter and more resilient than the red squirrel. It has displaced the red squirrel also because it is better able to store fat for overwintering.Another factor that is contributing to the spread of the Grey squirrel is because of an increase in their preferred vegetation (trees mainly) as opposed to that which the Red squirrel prefers. Fir and spruce have been on the decline since 1980, squeezing the fluffy red ones further and further. A real shame because damn they are cute. Not the grey ones, no. Ewww.