Friday it will be a year since the UK voted to leave the EU, so let's have a look at the current state of affairs.

David Cameron is gone, Theresa May has ballsed up a massive majority and thrown the country into an unprecedented political shit storm, the UK economy is the slowest growing amongst the EU countries in the last three months, social unrest is starting to boil over in the aftermath of numerous terrorist attacks and preventable tragedies, Ben Ainslee can't sail anymore and the national morale is at an all time low. In fact it's so bad that one half of the most annoying TV duo Ant & Dec has checked into rehab!

So all in all a pretty solid year! Go Britannia. 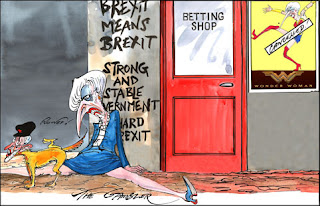 The surprise election results are, as claimed by many young voters, revenge for the referendum results. A stand against the establishment and a stand against the brexit vote. Which I find hilarious seeing that it was the young voters that failed to turn out for the referendum vote that put us in this turd pit in the first place! So was it revenge on their own laziness? Well done. You've not only failed at your first attempt, you've now made it worse with your second.

I also foresee some more rioting in the fallout from the Grenfell Tower tragedy. Nothing screams broken society more than nationwide rioting. As for the EU, hard brexit is now unlikely and there is even talk amongst the top European parliamentarians that the UK might end up not coming out of the EU and end up in a worse situation than before the referendum. Amazing! 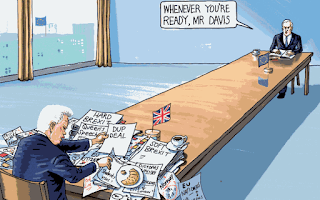 So where does that leave us? Well it leaves us with increasing uncertainty and insecurity. The economy is shaky and the pound will continue to take a battering due to the uncertainty on brexit. Theresa May is a lame duck and will be vilified for everything she does and only tolerated by her conservative peers for a few more months before they torch her.

We are living in cynical times. And we work in an era of grave political change. Yet onwards we must.