Cycle with a Smile


In my opinion the most enjoyable form of transport in urban environments is the bicycle. Yet in London 9 out of 10 cyclists seem inherently angry. They love to shout at everyone and if anyone dares to encroach on their 'personal cycle space' they scream murder and lash out with anything at hand. On most occasions this is a verbal diarrhoea of obscenities. 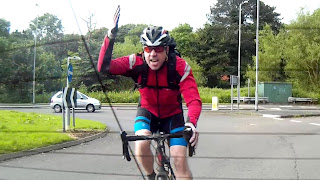 I don't understand this bell-endish behaviour. Where does it come from? Cyclists in London seem to have a massive, lycra covered chip on their shoulders. Since the London Olympics, cycling in the capital has really taken off and we are now slowly coming out of the novelty period. The UK is still in the early phases of a bicycle culture. Everybody is still getting used to having more cyclists on London's roads and it will take a few more years before things settle down.

If you look at other cities, such as Amsterdam or Beijing, where cycling is much more integrated into everyday life you will find they also went through these periods of adjustment years ago. Yet one thing I am fairly certain of is that during these periods of adjustment the Chinese and the Dutch weren't so angry and didn't dress like fat amateur wrestlers with helmets and clip-in shoes.