When it comes to sports the Dutch are known for their speed skating, field hockey, and making it to world cup football finals. Which we then subsequently lose.

But there is actually a lot more to to us than meets the eye. We regularly produce rare sporting talent, exceptional prodigies of their generation that excel on the world stage, proving there's more to us lanky blond cheese munchers than tulips and bicycles. 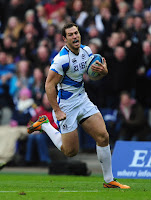 Tim Visser - the first Dutch professional rugby player was scouted while playing in the Amsterdam sevens and immediately brought over to the Newcastle Falcons academy as a teenager. There he excelled and eventually moved to Edinburgh where he recently became the all time leading try scorer in all competitions. For some reason or other he decided to become a Scottish national and play for the them instead of the mighty Orange (rugby) army.

Marvin van Heek - The first real skiing (star) coming out of the Netherlands. Marvin caught the attention of the skiing fraternity with an 8th place in Chamonix World Cup downhill race in 2012 but was never really able to consolidate that performance since then due in part to a recurring back injury. 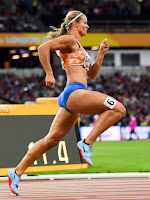 Dafne Schippers - Long, muscular legged Dafne has recently lit up the running track with medals at the Olympics and World Champs. She's not only smoking the Jamaicans (hihihi "smoking") and the Americans but she's also looking cool doing it. Born in my birth city, Utrecht Dafne was a very successful heptathlete before specialising in the 100 and 200 meters.

Epke Zonderland - Epke the medical student from Lemmer has twisted and flipped onto the world stage since winning the gold medal at the London Olympic games of 2012. With his legendary triple combination air manoeuvre in the finals of the high bar he shot to fame and hasn't looked back. The Flying Dutchman was recently rumoured to be training for five air combinations...

So we are not only a uncomfortably tall nation but also a surprisingly sporty little country that every now and then throws up a surprise in the wired world of sports!