As the most intelligent life form on earth, why didn't we evolve into sea faring animals, considering 71% of the earths surface is covered in water? Why did we end up as predominantly land animals?
It's widely accepted in evolutionary biology that we most likely all came from some form of microbial bacteria (stromatolites) that evolved from a warm water environment somewhere on early earth.
Following that, some 550 million years ago, we decided to leave the water and get crawling on land. But why?! Why not stay in the warm water and dominate the deep blue as mermaids and mermen?  Thinks Waterworld with Kevin Costner as a gilled mariner fighting for survival. 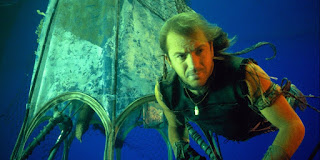 Some might say that we do rule the waves and everything in the deep blue sea, but this isn't the case of course. We're good at fishing the seas to death, we've built submarines and submersibles that can stay underwater for days but we've never actually evolved as a species to do the same without the help of oxygen providing equipment or machinery.
However with the rising water levels caused by global warming Waterworld might be a closer reality than we care to think. So we might yet evolve into the Sea Humans we were always meant to be. Beers at the Shipwreck Inn followed by dinner at the Titanic. We'd eat loads of omega-3 rich food and we'd be well hydrated!
Labels: Animals Biology Earth Life Plants World