I very much enjoyed Ready Player One. Ernest Cline's futuristic adventure into 1980's and 90's culture. Granted it played to the heart strings of my generation and probably isn't appreciated nearly as much by baby boomers or Millennials however the story on its own held me captivated right to the end.

Now, the same can't be said of Ready Player Two, the sequel to his first story. I eventually fought my way through the book but I almost didn't. The cringe factor hit critical levels towards the end of the story, during a lengthy battle scene including 7 elaborate, digital versions of The artist formerly known as Prince. This convoluted scene is so incredibly ridiculous and over the top that I almost put the book down for good. 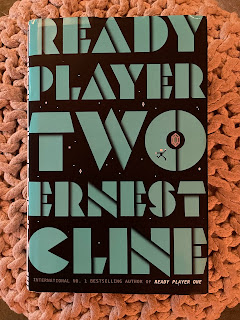 Don't get me wrong there are still good bits in the book. Scenes that made me smile with recognition and retro gold that I can relate to, but on the whole it was Ready Player One one so much steroids that it should have been banned from publication. In fact it was such a downer that it has somewhat tainted my recollection of the first book.

When I mentioned to my boss, Tom Davies, who designed all the eyewear for the film adaptation of Ready Player One, that I was reading Ready Player Two, the look on his face said it all. The second instalment is comparable to an overexcited adolescent drinking way too much on their first night out, chundering their guts out and then having the mother of all hangovers. Basically an allround regrettable experience.