The Internet and Tribalism

The online world is a dangerous place for 'down on their luckers' with a lot of time on their hands. Especially personal tragedy victims that are left in a rut and feeling like they have been dealt an unfair hand in life. They need someone to blame, anyone but themselves. They have trust issues that's been fuelled by the 'fake news' generation. The easy and obvious target for their predicament is the establishment, the rich, the left, "the man". They spend an insubordinate amount of time online where companies like Google and YouTube have written algorithms that keep them watching and keep sending them recommendations for the same material. A radicalisation vortex. Algorithmic echochambers that leads to brainwashing through the internet. Rabbit holes that turn their online world into their reality, and in doing so polarises them into tribalism. Black and white. Us against them. Right or wrong, Good or Evil. There is no middle ground, no relativising, no discussion no open-mindedness.

QAnon and On and On

There is an excellent podcast from the New York Times about the emergence of the QAnon movement and how the internet played a crucial role in the radicalisation of its followers. Rabbit Hole does a great job of highlighting exactly how the current internet age has isolated large sections of the population. It sheds light on how these people's lives are fundamentally shaped by their online activity.

The majority of QAnon believers are insecure people, in some ways like many of us, that require validation, security and social interaction. Very much like any social organisation, a gang or a sports team. The feeling of belonging somewhere, being needed and wanted as a respected member of a community is paramount. They need to matter, feel important, unique and relevant, and they crave approval and affirmation.

The secrecy is at the core of the QAnon movement, as it is with so many cult-like beliefs. Having privileged "inside knowledge" gives the followers the feeling like they're part of a big secret truth, dispensed from a godlike 'cult' figure invariably related to an ultimate reckoning or "great event".

I have just finished a great book on this very subject called The Storm is Upon Us, written by Mike Rothschild. The book clearly lays out QAnon's timeline, from creation to the current day. Not only does it highlight the key players but also the incredibly destructive nature of this extremely peculiar movement and it's remarkably determined members. 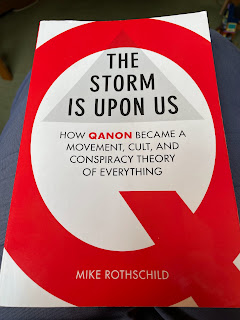 QAnon started on obscure online chat forums called 4chan and 8chan, where down on their luck gamers and other jobless loners were free to sprout their unproven nonsense to anyone who was receptive to that kind of conspiracy theory. These were the same websites where numerous mass shooters uploaded their hate filled manifestos. These places were cesspools of right wing, racist autists, lacking the social skills to interact in the outside world. They had nothing better to do than get sucked into the rabbit hole of online, repetitive conspiracy theories about good versus evil, where evil represents the establishment that is blamed for their unfortunate situation in life.

It is of course no surprise that the pandemic and its worldwide lockdowns were the cause of a gigantic spike in conspiracy theory activity. People cooped up in their homes for weeks on end. Those susceptible to a good conspiracy theory now had all the time on the world to get radicalised by the online algorithms, rabbit holes and social media community, without anyone telling them their developing thoughts are crazy and unsubstantiated. It represented the perfect conspiracy theory storm. An ideal environment for the propagation of a theory, however farfetched, offering an explanation for the current depressing micro and macro state of the world around them. In the end the social media platforms removed all the incendiary material but the damage was done by that time, resulting in America in the storming of the Capitol building on the 6th of January.

One thing we can learn from all of the above is that we live in a tribalist, vitriolic and divided world these days. There is less sense of community and much more anger and hate and these negative emotions have found a cultivating home online.