I've always been a massive Angus MacGyver nut. My brother and I used to watch it religiously when we were little kids. Sure I watched Knightrider, Airwolf and the A-team of course, but to me MacGyver was a real hero. Hated violence, loved the outdoors and hockey. He was always kind, and of course the best bit, he could dismantle a tank with his trusty swiss army knife!

Having lived in Switzerland for almost a decade, with a dad who was a collector of just about anything and everything he found cool, I have seen and used just about every variety of Swiss army knife that was made. From the classic, standard options to the Swiss champ, 50 function ones with a wood-saw, screwdriver and magnifying glass included.

However, about 15 years ago I was gifted a small, classic Victorinox pocket knife from my father-in-law and I can honestly say I use it almost every day. It lives in my left hand trouser pocket and sees action for a whole variety of ridiculous tasks all the time. From retrieving splinters to cleaning finger nails and from tightening screws to opening packages it truly is my own little Angus MacGyver in my pocket. 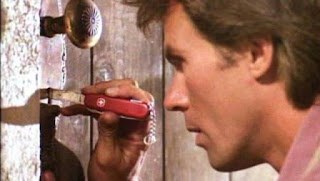 I won't say it would get me out of a nuclear bunker or that I could use it to fashion a telescope or a hang glider but it has proven to me once again that it is often the small and seemingly insignificant gifts that are the most precious and useful!

Like Mac used to say "Any problem can be solved with a little ingenuity?"