I have fallen out of love with the NBA

I love the game of basketball and I love the NBA. I grew up on the 1990's NBA of the Chicago Bulls and the Dream Team. The triangle offence and the Utah Jazz pick and roll. Power Forwards like Karl Malone and Chuck and Big men like Shaq, Ewing and Olajuwon. The basketball was varied and thoughtful. Clever and intelligent. Coaches like Greg Popovich, Jerry Sloan and Pat Riley propagated team play, ball and player movement and variety.

Now I don't love the game of basketball and the NBA so much anymore.

Nowadays you rarely see good power forward play down in the post. You scarcely see players settling for well crafted midrange jumpers or shots from a foot inside the 3-point line. But more worryingly, very few teams play proper team basketball, rotating the ball in and out of the low post, keeping the ball and the players moving, shifting the point of attack and involving every player on the floor.

These days it's all isolation and three pointers. All the emphasis is on the one, two or three star players, clearing the floor for one-on-one isolation play or high screens to create three point opportunities. That's 90% of the play. The variety, creativity and team basketball has drained out of the NBA.

I recently watched game 6 of the 2012 NBA playoffs between the Chicago Bulls and the Philadelphia 76ers and I noticed that even as recent as 10 years ago the game was vastly different to today. I don't have a vested interest in either team but I found myself wholeheartedly enjoying the game. Just like in the 90's when I could happily watch any NBA game, no matter the teams. And that was mostly because of the way the game was played. It was so entertaining how the ball was moved in and out of the post, resulting in a variety of shots from layups to midrange jumpers, dunks, and the occasional three pointer. There was real emphasis on team play, rotations and player movement. Of course even back in the day you had plenty of star players, like Jordan, Barkley and the like but on the whole they let the game come to them. That's why you didn't see the type of individual numbers and statistics you see these days.

Watching game now I find myself getting bored of how the game is played in 8 out of 10 games. Isolation after Isolation. High screen after high screen. Selfish play oriented around the few stars, too much show boating and way too many game stoppages for video referrals. The main reason for this negative change is the influence of social media.

The individual egos have become bigger than the league and the game itself. There is such an emphasis on building and selling your individual brand and profile that it's no longer a team game but rather a collection of stars surrounded by some role playing nonessentials. Basketball in the NBA unfortunately is no longer a team sport. 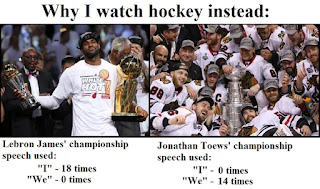