I've always been a little slow and I know its no longer fashionable or cool but after almost 2 years I've finally managed to catch the Chinese bat flu. Even the Queen caught it before I did and she has about 5 castle sized bunkers she's been hiding in. But you know what, it might be retro cool to catch it now. Maybe I'm so late to the party that I can start a new party...? I think the strain I caught is called GETOVerID19.

I was secretly hoping I'd make it through the whole shit show without catching it but alas within sight of the finishing line I've stumbled and face-planted. The dreaded lateral flow test or LFT (pandemic lingo) came back with two lines. The cough was there, a slight temperature, mild headache and upset belly. However the only real sidelining symptom I experienced was tiredness and being drained of energy. 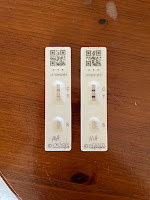 So the past week has been spent at home once more, back to lockdown life. It's brought back harrowing, PTSD style memories of homeschooling and never-ending calls of "I'm bored papi, what can I do?". On top of all that, it is now publicly frowned upon to isolate if you have the VID. It is seen as little more than a nuisance now and so even if you're coughing your small intestines out of your anus not coming into the office is just a bit pathetic. So basically I've got the worst of both worlds. I've not only caught the smell stealing, taste depriving, head splitting bat shit housery, I'm not even allowed to cry about it!

Well at least I can tick it off my list I guess.